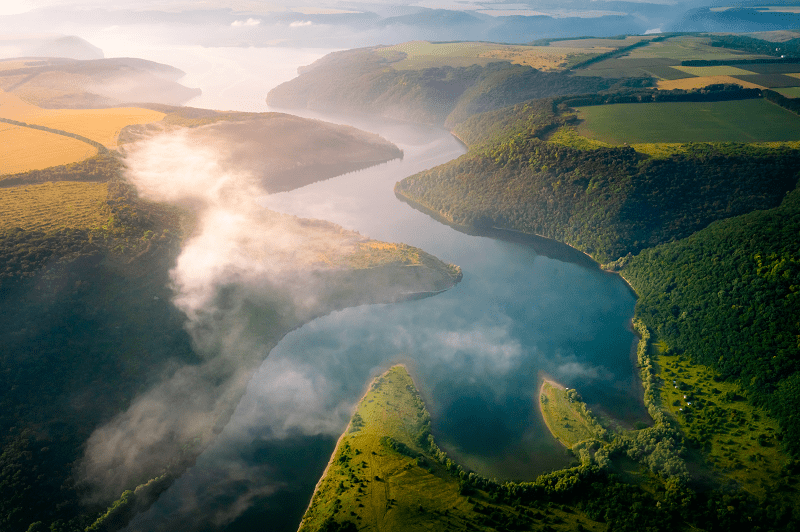 In 2022, World Environment Day puts light on the urgent need to save our planet, as we have only one earth. Natural resources are not inexhaustible and preserving them for future generations is a concern for the whole planet.

Water is an intrinsically shared natural resource as it flows through different countries, crossing borders on their way. According to UN Water, transboundary basins cover nearly half of the Earth’s land surface, and account for an estimated 60% of global freshwater flow.  Transboundary basins provide drinking and domestic water to around two billion people. More than 40% of the global population relies on shared basin for their livelihoods, creating strong interdependencies between countries.

Two of the major transboundary rivers flowing through the Eastern Partner Countries are the Kura in the Caucasus and the Dniester river between Ukraine and Moldova.

The Kura starts in Turkey, flows through Georgia, then to Azerbaijan, where it receives the Aras as a right tributary, and enters the Caspian Sea. Tbilisi is the most densely populated area of the entire Kura basin. Baku is located outside of the Kura river basin. Nevertheless, the capital receives a significant part of its drinking water supply from the transboundary basin. The main threats to freshwater biodiversity in the Kura River basin are pollution, water abstraction, alien species and hydropower and water control dams.

The 1,362-kilometre-long Dniester/Nistru River is one of the largest Eastern European rivers. It starts in the Carpathian mountains in Ukraine (a very small part of the river basin is in Poland), flows through Moldova and then re-enters Ukraine where it discharges into the Black Sea. The Dniester supplies drinking water for a large part of the basin, including Odesa. Hydropower generation and fisheries are important issues of the river. The river faces severe water quality problems, declining biodiversity and deteriorating ecosystems. The impacts of climate change, such as increasingly frequent floods and droughts are already felt in the basin.

Transboundary water cooperation is one of the main obligations for signatory states under the UNECE Convention on the Protection and Use of Transboundary Watercourses and International Lakes, also known as the Water Convention, which promotes cooperation on transboundary surface waters and groundwater. Azerbaijan, the Republic of Moldova, and Ukraine have ratified this convention with the implications that go with it.

In the Eastern Partner countries, several rivers are transboundary rivers, which involves the necessity for cooperation instances and processes.

From 2016 to 2021, The European Union Water Initiative Plus (EUWI+) programme supported the six Eastern Partnership countries to adopt and implement a systemic approach to water management. On the transboundary water cooperation level, the programme helped revitalise and further develop 5 transboundary agreements within the region (Dniester, Kura, Khrami-Debeda, Neman, and Western Dvina basins) and with EU neighbouring states, and a joint field survey of transboundary rivers at the basin level (Debeda).

Some examples of cooperation instances can be mentioned. A general agreement on co-operation in environmental management between Armenia and Georgia was signed as early as 1998. The two countries have co-operated on the Khrami-Debed River since 2000. The EUWI+ gave support for the two countries to realise a joint field survey of transboundary rivers.

In 2012, Moldova signed a bilateral treaty with Ukraine for joint management and protection of the transboundary Dniester basin. Moldova also shares the Prut sub-basin to the Danube River with Romania and Ukraine. Since 2010, Moldova and Romania have agreed to cooperate on the protection and sustainable use of the Prut and Danube rivers. In this way, the EUWI+ programme helped for the establishment of a bilateral Moldovan-Ukrainian Dniester joint Commission and provided guidance for the creation of a Moldovan-Romanian-Ukrainian working group under International Commission for the Protection of the Danube River.

Eastern Partner countries face several challenges in their way to effective transboundary water cooperation. For instance, recent events linked to Russian aggression of Ukraine have put a stop to Ukraine’s cooperation with Belarus because of its alliance with Russia. War is also a serious blow to transboundary cooperation. The war leads to various cross-border transport of air and water pollution, notably via rivers into the Black Sea with its sensitive ecosystem that was already damaged in past decades. It is impossible to know how much time it may take to revive dialogue on the river basins shared with Russia and Belarus.

The EU4Environment – Water and Data programme will support the strengthening and continuation of already existing cooperation. It will also ensure dialogue and cooperation between local experts on different aspects of transboundary water cooperation, such as studying and delineating transboundary groundwater aquifers, exchanging data and information and continue joint monitoring surveys, cooperation on water pollution prevention and control, water flow regulation, conservation of biodiversity and cooperation in emergency situations.